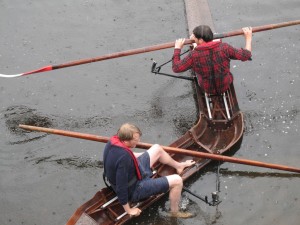 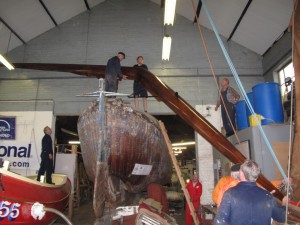 Boomerang Boat Museum
NEMT is proud to be associated with Australia and Norway, aiPotu and the unusual sight and shape of the boomerang boat which is now on show at Wapping Street. The Boomerang Boat was made at the 16th biennale of Sydney 2008 by artist duo aiPotu and consisting of the two Norwegian artists Andreas Siqueland and Anders Kjellesvik, who restored the boat and searched for a suitable home in Scotland, Wales and England including the Newcastle area. South Shields became a natural point of departure for them. Going by coast, a series of possibilities were investigated. But they just kept on coming back to North East Maritime Trust, a place ‘where we just love old boats’ and did not need much time before the Trust decided to take on the responsibility of creating a new home for the stranded vessel.

While the boat is definitely very unusual, it has a more serious, relevant history and build using traditional skills now in decline, even down-under.

THE ARRIVAL OF THE BOOMERANG BOAT

We are happy to announce the arrival of the Boomerang Boat on the British Isles. The boat has been on the ocean for several weeks. It has traveled from Australia where it was presented as a work in progress at the 16th Biennale of Sydney 2008. A maritime camp was set up in the former dockyards at Cockatoo Island in the Sydney harbor. 5 weeks was spent making an old timber double scull into a boomerang shaped vessel that runs in circles.