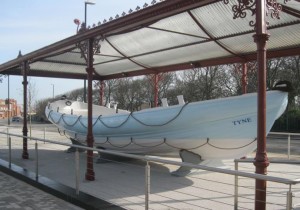 In all, the general condition was remarkably good for a boat that was launched in 1833 with 54 years‟ service, as well as being on display at South Shields since 1894. (ie: 180 years old). Read more in: Tyne Lifeboat History

Eight areas were identified and paint scrapings removed for analysis. Paint samples from under the bow and stern rope fenders were also removed for analysis.
The buoyancy boxes, port, starboard and centre seating laths were removed for complete stripping of paint down to the bare wood.
All paint was then removed from inner hull and attachments using an industrial paint stripper. This was necessary due to the thickness of the existing paint coatings, in places this amounted to 20 layers.
All steel rings and thole pins were descaled, an anti-rust compound applied, etch primed then coated with two coats of International Yacht Primer. These were then painted with a black matt finish.
The three deck board planks identified as having wet rot/wood worm present were removed. Following removal, the support timbers under neath these boards were also rotten and required replacing. Several planks of the starboard void space had to be removed to gain proper access to the supporting deck board planks. The void space revealed the amount of repair that had been completed after the bomb damage that occurred in 1941.
After the supporting timbers and deck board planks had been replaced, the gaps between the planks were caulked and sanded down to a smooth finish. Loose internal planking re-secured with brass screws.
All internal surfaces that have had paint removed were fully sanded down, wiped down with white spirit then fresh water and a final sanding before painting.
All visible internal steel screws that had been used in the past had rusted and marked the old paintwork. These were replaced with silicon bronze screws to avoid a repeat of the rusting.
Three coats of International Yacht Primer, two coats of International Pre-Kote white were then applied. All mating surfaces that would be hidden by the refitting of the buoyancy boxes and seating laths were given two coats of International Mediterranean White and these boxes were refitted. All countersunk screw heads were filled in to a level with the existing wood and sanded to a smooth finish. Two coats of International Pre-Kote white then International Mediterranean white applied as the final top coat.
The final top coat was toned down from a full gloss to a 70% gloss by adding „International Matting Additive‟ to the International Mediterranean White.
The two areas of the gunwales that had signs of wood breakdown due to cast iron bolts were removed together with the bolts and oak wood inserts made.
The copper protection plates were removed, cleaned then annealed. The latter process was necessary as the copper sheets were very brittle. Once all the painting had been completed including the finish top coat, the copper sheets were replaced on a bed of putty and secured with new copper tacks.
The two damaged sections of cork buoyancy fender were repaired using a filler to bring the indented surface back to the original level. The whole of the fender was then sanded down and two coats of International Yacht Primer applied.
The external hull planking had all flaking paint removed, bare wood primed with two coats of International Yacht Primer. The support chocks were moved to gain access to the planking in way of the chocks, these areas were scraped clean, primed and two coats of International Pre-Kote white applied. When the newly painted scraped sections had dried, a further full coat of International Pre-Kote white was applied.
The external hull planking below the waterline was painted with International Mediterranean White containing 50% by volume of International Matting Additive. This reduced the gloss coating to a 26% appearance.
After discussions with representatives from South Tyneside Council, a light blue colour was identified from the paint analysis charts produced by International Paints. This colour appears to have been the prevalent colour throughout the paint layers.
The final light blue colour was achieved by mixing International Mediterranean white with International Squall Blue on a ratio of 5:1. 30% International Matting Additive was then added to reduce the gloss appearance to 70%.
Two coats of the light blue were applied with a fine sanding down with wet and dry sandpaper between coats. The two coats are necessary to bring out the full opacity of the light blue.
All paint was removed from the centre support chock; two coats of International Yacht Primer applied then a top coat of International Danboline Grey. When this paint had dried, the centre chock was replaced in its position under the boat.
The end support chocks were then removed. The removal of these two end chocks could only be done once all the interior work on the lifeboat had been completed. This was necessary so as not to upset the stability of the lifeboat on the centre support chock.
All paint was removed from the two end support chocks; two coats of International Yacht Primer applied then a top coat of International Danboline Grey. These support chocks were then replaced in their respective positions fore and aft under the lifeboat.
Stainless steel grab line ringbolts together with new grab lines were fitted around the lifeboat at the waterline.
New valve wheel has been made and fitted for the ballast tank drain arrangement.
New forward rope fender has been made to replace the existing one due to its poor condition that any restoration is not possible. This has now been replaced in its position at the bow of the lifeboat. The aft fender has had all the paint removed, soaked in a mixture of linseed oil and Stockholm tar, dried and replaced in its position at the stern of the lifeboat.