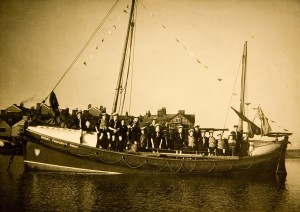 A Potted History of the Lifeboat Henry Frederick Swan

THE Henry Frederick Swan was built during the First World War at the Cowes yard of S E Saunders on the Isle of Wight. She cost £6,901 to construct, and was a gift from the widow of Henry Frederick Swan who had been prominent in Tyne shipbuilding circles and was also chairman of the Tynemouth branch of the RNLI for many years.
She replaced the previous Tynemouth lifeboat Henry Vernon, which had been transferred to Sunderland where it remained in service until 1935. The Henry Frederick Swan’s first recorded rescue was in the winter of 1920 when she went to the assistance of a steam trawler, the Current, that had run aground on the Black Middens. In subsequent years the lifeboat, housed at Clifford’s Fort at North Shields, was called out many times, but it was her last call-out of that era on the Tyne station that was also the most tragic. This was shortly before the Second World War when the Cullercoats lifeboat Richard Silver Oliver capsized while on exercise. Six of the 10 lifeboatmen aboard were lost.
The Henry Frederick Swan eventually passed into the reserve fleet in 1939, being replaced by the John Pyemont. In 1941, however, an air raid destroyed both the RNLI and Tyne Lifeboat Society boathouses at North Shields, together with the boats John Pyemont and James Young that were inside them. The Henry Frederick Swan consequently returned to service and during the war assisted several vessels, including the submarine Tuna when she ran aground south of St Mary’s Island in 1943.
Eventually the old lifeboat was replaced with a new one, the Tynesider, and was subsequently acquired by local Sea Scouts, passing into private ownership and then to the NE Maritime Trust.