Sculling and picking up lines

This Tyne foy boat Joan was probably built by the South Shields boat builders Mitchelson’s in the 1920s.  Foy boats were privately owned by foy boat men who plied the Tyne and contracted to provide services for ships on the river by assisting with mooring, transporting crew and supplies (especially to ships at anchor).

Joan was owned by the West family and later passed through other owners hands as a pleasure craft until acquired by NEMT in 2009.

She is being restored to her pre war condition, requiring repairs to planking, new transom, repairs to ribs, thwarts , new stem etc. 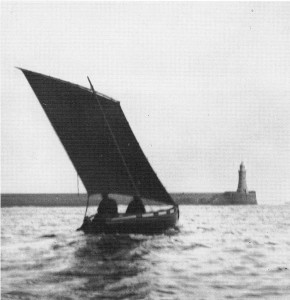