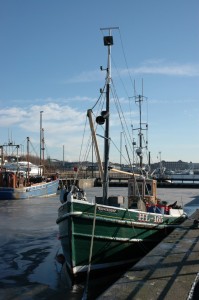 The UK’s oldest working fishing boat (in the over 10m category) was taken out of commission in February 2009. She is the Sovereign. Members of the North East Maritime Trust had taken a keen interest in her over several years and were able to save her when former owner Keith Alexander replaced her with a newer boat.

Sovereign was built by Wilson Noble in Fraserburgh back in 1936 for a Newhaven (Edinburgh) fisherman called Tom Hall. At that time she carried the fisheries registration no. LH171. During the war she was called up for naval service then subsequently fished out of Seahouses as no. BK29. Whilst there, she was owned by members of the Dawson family. In about 1955 her original Kelvin 66 engine was removed by the local boatbuilder, also called Dawson, and it was replaced by a Gardner 6LW engine, the engine which still powered her in 2009. She was sold from Seahouses before 1960 to a new owner in Port Seton, believed to be a G. Brown. At this time the number was changed to LH368. Mr Brown sold her to Peter Greig at the same port. After this she was sold to Victor Deere of Hartlepool and she was given a Hartlepool registration, HL165, which she carried for the rest of her working days. By the late 1960s she was based in North Shields and has since been in the care of members of the Woods and Alexander families. She is a remarkable survival, being little altered in 72 years of hard work.

Sovereign was not built as a trawler; in fact there were few fishing boats trawling before the 1960s. She motored across the North Sea to Esbjerg for fitting with a Danish type of winch to suit trawling, having previously worked as a ring netter and a seine netter. The term “trawler” has become almost synonymous with “fishing boat” in modern times though the term is a description of the method of fishing now in common use, usually using a net scraping the seabed. Ring netting and seine netting were types of fishing that required skill in seeking the fish and trapping them; these methods did no damage to the seabed but were more labour intensive than modern trawling.

On purchase for restoration, Sovereign was on the point of sinking, such was the decrepit state of her hull. In June 2010 she entered Fred Crowell’s boathouse for repairs. The work required was very extensive, the vessel suffering from serious wood rot, infestation with wood boring insects, and rotten spikes. Aside from hull problems, the Gardner engine suffered from no less than 54 years of continuous use; all the boat’s mechanical components were stripped and repaired. Ten months of continuous work by a team of four saw her substantially repaired but conserving as much as possible original material. After relaunch in April 2011 further detail work was completed at St Peters, Newcastle, where she is normally moored when not touring.

Sovereign is in the ownership of our associate body: Northumbrian Fishing Heritage Trust.

She is registered on the National Register of Historic Vessels, certificate no. 164. 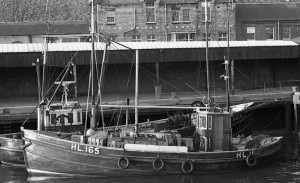