Waiting to leave the Sea Lock at Corpach

The fishing vessel “Rachel Douglas” was built in 1947 for Jackie Baxter-Douglas and his brother Thom. They named her after their mother.

The Baxter-Douglases lived and worked at the north Northumbrian village of Seahouses and they had a vessel in need of replacement.  New fishing boats were in great demand after the war but engines were hard to obtain, however, William Weatherhead and Sons accepted the order for their yard at Eyemouth, some twenty miles up the coast, just over the border. Unfortunately, they could not provide an engine so the family’s old boat had to be sacrificed to provide one until such time as a new one could be obtained.

The Rachel Douglas was completed with the old Kelvin 44 engine installed and ready for launch. The builders had fitted carved nameboards with the name spelt wrong – not a good omen. The name was corrected and the owners and family were taken by car to Eyemouth intending to take the boat to its home at Seahouses. After leaving the harbour at Eyemouth the old engine failed and they had to return to port; repairs were needed and the family, instead of enjoying the voyage south, had to hire a taxi home. Matters were soon resolved and the Rachel Douglas started a successful career working seine nets and ring net out of Seahouses, whilst filling in with potting at times. During the autumn herring season the vessel would migrate to other ports with a partner boat to ring net for as long as good catches could be sustained.

A little while after completion a new engine was delivered and fitted, a Kelvin 88; no doubt substantially improving the boat’s power and reliability.

In her early days the Rachel was finished with all her timbers varnished above the waterline. After a time her galvanised iron nails started to discolour the woodwork, with dark staining along the grain, so in common with similarly finished boats she started to look untidy; she was then painted blue, picked out with white waterline, gunnels etc. Blue was the traditional colour for painted boats at Seahouses and continues to be the most popular finish there today.

Rachel Douglas gained the distinction of hauling the largest ever catch for a Seahouses boat, but not to the benefit of her owners. The catch was so large that the net could not be lifted or otherwise discharged. The full net was towed to Beadnell at high tide and lowered onto the sand; left for recovery at low tide. When the tide receded the huge catch was in a big heap within the net and crushed under its own weight, inaccessible for disposal and in no suitable condition for the market. A dead loss.

In 1963 Jackie and Thom looked for a larger vessel and obtained a larger ringer, Amalthea, from Campbelltown; Rachel Douglas was put on the market and sold to John Wilson of St Abbs, a couple of miles north of Eyemouth. John and his son Ian worked the boat for the next 39 years during which time she was kept smartly in her blue trim and continuing with her original registration BK231.

John and Ian made a few changes. They obtained a different wheelhouse, slightly longer, but fortunately in keeping with her lines; it is actually older than the boat, having come from another vessel which was being refitted with a new one. They also converted the Rachel to become a trawler, fitting her with rigging, deckgear and tackle for trawling the seabed. A newer engine was also fitted, a secondhand Gardner 6LXB.

The Wilsons retired from fishing in 2002 and Rachel Douglas was again on the market. Three fishing boat enthusiasts from Seahouses and Newcastle got together and formulated a plan for her acquisition and restoration. This really was intended to be a restoration – not a conversion or butchery as has happened so often when beautiful old vessels have been converted to sailing boats or “live-aboards”.

A small group of NEMT members purchased the vessel in September 2002 and a couple of months later she was moored in the St Peters Marina, Newcastle.

To undertake the extensive repairs that were needed they engaged boatbuilder Fred Crowell of South Shields. Fred is an outstanding repairer of wooden boats; he used to build them when working for Robsons of Shields, prior to setting up in his own workshop.

The owners and friends started work at St Peters on largely superficial tasks but they got into Fred’s in May 2003 for serious work, including re-nailing of the hull planking, reconstruction of the bulwarks including new capping rails, new masts, new fuel tanks, deck gear converted back to ringer gear, etc. Other demands for Fred’s slip precluded further work in 2003 but Rachel was back in 2004 to receive a complete new deck. In 2006 the last of the major work was completed when a reconditioned transmission was fitted and internal work carried out. This internal work included tidying up the original crew cabin with its four berths and some alteration to the fish hold, including two further berths, the fitting of a toilet and also a galley. Whilst some will say this smacks of a compromise or a conversion, it has to be said that it has been very responsibly undertaken, without damage to the integrity of the original vessel, the alterations being cleverly concealed behind the posts and removable fish boards within the hold.

Fred Crowell’s skill and his passion for his work is remarkable; he continues to take great interest in the old boats he has repaired. He was very tolerant of the sometimes demanding owners, their odd desires and their volunteer helpers, one of whom, Abiy Shiberu Zegeye, needs special mention. As a political asylum seeker he seemed oddly out of place at first but he soon became the leading volunteer; a merchant seaman with a real passion for boats and a remarkable capacity for hard work. He is now a UK citizen and working hard again as a full time seaman.

The vessel is restored to 1950s condition, and although a purist may query the secondhand wheelhouse, it has to be said that to replace it with a replica would be disrespectful to that wheelhouse’s historical worthiness in its own right. In fact the wheelhouse has been kept traditional inside – no fixed electronic equipment – it does have 1940s brass electrical switches, “Sailor” radio etc, though a couple of modern appliances can be plugged in for voyages.

After completion the Rachel Douglas visited a few festivals, including events organised by the North East Maritime Trust. The most significant trip has been to the Portsoy festival on the Moray Firth in 2007, after which she visited the Scottish west coast including the Crinan Classics Festival, crewed throughout by members of NEMT, with which trust the boat is closely associated. Unfortunately the dearth of suitable events within a short range of her current home on the Tyne, together with the high cost of fuel, has frustrated the team’s desire to appear in public more often.

The team that formed around Rachel Douglas has grown and moved on to further projects celebrating the fishing boats of the era from the end of sailing to the introduction of steel boats – a major sector of our maritime heritage, one that has been almost entirely neglected.

Rachel Douglas is managed and funded by our associate body: Northumbrian Fishing Heritage Trust. She is normally moored in St Peters Basin Newcastle when not touring. 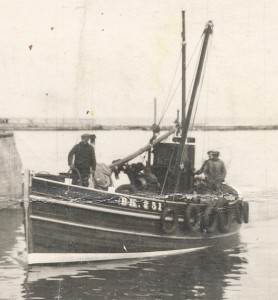