Peggy was built by Harrisons of Amble in 1924 for stock but soon found a buyer, one of the Hall family of Beadnell. She was then sold to Robert Rutter of Seahouses and at that time carried the number BK7. Later she moved to Amble and became Glad Tidings BH177. Her last port was Hartlepool, from where she was bought by an NEMT member. Now she has been extensively restored with much work being undertaken by Fred Crowell in his workshop in South Shields.

These are lines drawn using the strake(plank) edges and gunnels and listings have been omitted for clarity.   The listings run for the full length of the vessel for the top two strakes and about the middle two thirds for the third strake. 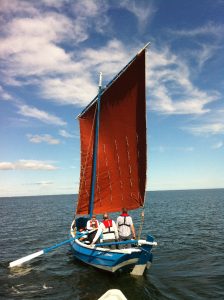 Cobles are notoriously difficult to tack. Unless a jib is set it is almost impossible to get out of stays, hence the oar.