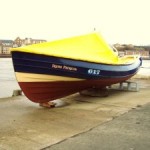 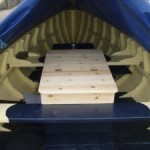 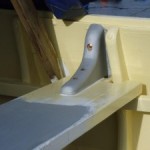 Primarily for a scrub and bottom paint but, like most boats, it didn’t stop there!

As the interior paint had broken down in a number of places it was decided to take her back to the wood and in doing so, revealed the inevitable stream of anomalies; a familiar tale indeed I’m sure!

By the end of summer months- in fact well into the Winter, following so much rain, sporting a new yellow tent, She was now looking very fine with exception of one significant change……The Name!

Whilst still showing great respect to Harry Chamberlin’s Mother “ Mary Young”, I wanted to honour my late Wife and rename the boat “Irene Patricia”. To avoid all the superstition associated with renaming, I followed a trusted and correct procedure; namely, casting into the sea the old name, paid homage to Neptune and some special prayers for Mary and Irene!

Back on Her moorings now and have thoroughly enjoyed a good summer of 2013.