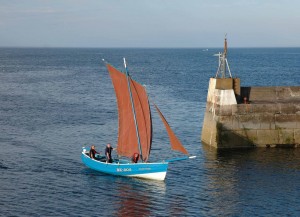 Golden Gleam was built in 1948 by Ralph Dawson of Seahouses, Northumberland, for a fisherman called Main Downey who lived in Boulmer.

The boat was a Northumbrian coble, 29 feet long, powered by a (secondhand?) BMC car engine, adapted for marine use. The vessel had a mast and auxiliary sail. She was one of the earliest boats built by Dawson’s and appears to have been a copy of the older cobles in use at that time. Dawson’s mainly built larger craft: ringers, seiners and trawlers; not many cobles.

Golden Gleam subsequently was sold several times, moving to Blyth, Sunderland and Cullercoats before becoming a pleasure craft at Redcar.

In 2000 Golden Gleam was purchased by an NEMT member without a fixed engine and rigged for sail. He has refitted her with mast, sails and rig in traditional local fashion as far as possible. The boat usually has an outboard engine fitted in a well near the stern. She is kept at Seahouses most of the time.

Though not an exact restoration, the vessel follows Northumbrian tradition as closely as can be achieved: painting scheme, rigging details, sails etc. being faithfully copied from local practice. 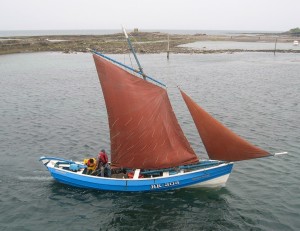 Golden Gleam is normally moored in the “Fluke Hole” at Seahouses during the summer months but is stored during the winter.