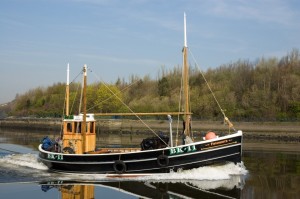 On the Caledonian Canal

Favourite was formerly a seine net fishing boat, built in 1947 by Walter Reekie at St Monance in Fife.

She started her working life at Castletown, Isle of Man, in the hands of Jackie Maddrell and his sons; she was then known as “Margaret Anna” and carried the number CT101. The stay on the island was not long for she was soon at Amble, Northumberland, in the hands of the Handyside’s, with the number changed to BH35. In the late 1960s she was bought in a run down condition by Bill and Michael Robson and taken to Seahouses, being renamed “Favourite” with the number BK11. They undertook a lot of work and altered her configuration from that of a centre wheelhouse with large stern well to the conventional arrangement she has today. They also replaced her original Kelvin engine with a Gardner 5LW. After 20 years she was sold back to Amble as BH49 and worked there briefly before purchase by Peter Nisbit of St Abbs. He cared for her for the next 33 years. During his ownership she was numbered LH149. He also made changes including fitting a Gardner 6LW engine and rigging her for trawling. Prior to then she had been rigged for seine netting, as well as being able to work pots etc.

In February 2006 her working life came to an end but her rarity was recognised by members of NEMT; being one of perhaps only half a dozen survivors of her type. Favourite was restored in 2007 under the supervision of Tyneside’s last wooden boatbuilder Fred Crowell, in his boatyard at South Shields. After sixty years of heavy usage there was substantial work to be undertaken including replacement of several frames, beams, planking and deck, together with mechanical work. Fred has worked tirelessly carrying out the skilled work whilst guiding the volunteers undertaking less exacting restoration tasks.

The restoration has been done to 1950s standards with the minimum of modern equipment or techniques.

Favourite is managed and funded by our associate body: Northumbrian Fishing Heritage Trust. She is normally moored in St Peters Basin Newcastle when not touring. 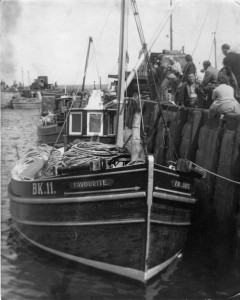 Unloading in Seahouses during the 1960s