Peggy is back in the Water 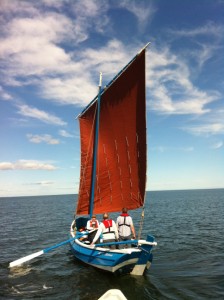 Sculling out of Stays

A Coble Restored
Old Northumbrian sailing coble “Peggy” has just been re-launched after extensive restoration work by Fred Crowell, Tyneside’s last wooden boatbuilder. Fred has been rebuilding the vessel over the last three months in his workshop next door to the North East Maritime Trust in Wapping Street, South Shields.
The 80 year old boat was saved by Mick Dawson (one of NEMT’s volunteers) and Fred Crowell, who has done much work on historic craft associated with the Trust, has replaced nearly half of the planking, much of the framing together with other difficult work on what was a very tired old boat.
Peggy was built in Amble in 1925 and worked as a fishing boat out of Seahouses, Beadnell and Amble before migrating to Hartlepool where Mick found her.
She joins the growing collection of regional historical working craft, being built up under the umbrella of the North East Maritime Trust.

Post Views: 1,430
This entry was posted in General. Bookmark the permalink.

This site uses Akismet to reduce spam. Learn how your comment data is processed.