NEMT has continued to celebrate its partnership with the Customs House by setting up an extra attraction at this year’s Knitted Victorian Christmas show which then moved to a Harrogate Show on 25 to 28-November. This included making the basic frames, a sleigh, fully working grandfather clock (which kept perfect time) and reindeers. Also included was the making of wooden plinths, numerous stretcher frames and setting up of the South Shields gallery shows “Grand Tour” of Salma’s Dream.

The knitters had formed their own group called ‘The Materialistics’ and NEMT was well represented too, with prime position given in the foyer of the grand hall. On Sunday when it was time to pack up, the snow started and there was about 4inches in a couple of hours. Everything was grid locked and Harrogate had come to a halt. In fact we were even offering hire of the sleigh to get home!! Everything had to be broken down and carried across a main road through the traffic and snow to our van which was driven by Tim West. It was an epic journey home….what should have taken 2hrs became 5 and a half. The Sleigh and Santa then had to be reinstalled into the Customs House shop the next morning and it’s on show there till next year. 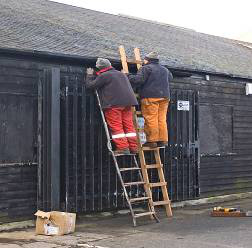 Property Repairs – Not the most popular of jobs, but everything else depends on keeping the workshop in good condition. The roof gutters have been in very poor condition for a long time but Tim West and Arthur Hamilton have been leading on overdue repairs. This follows work which was carried out a couple of years ago to seal leaks but time had taken its toll. Tim and Arthur have now removed the troublesome old sheet metal rainwater goods, which have been replaced with new plastic materials fixed in time for the winter weather (good timing). 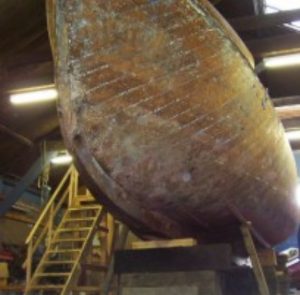 Work continues, with a lot of unseen work going on. Tim West has been preparing extensive administration and planning schedules of the work, seeking potential suppliers, estimating the time needed and finally looking at where to source the funds required. Arthur Hamilton has been checking the list of steelwork looking into material costs and getting estimates.

One outcome has been the production of a very smart fundraising leaflet to inform everyone of our scheme. We hope this will encourage the public to put their hands in their pockets and help finance the project. Tim’s document will also act as an introductory piece when approaching grant providing bodies.

The rudder was recently stripped down and then the stern whaleback removed. The latter was a difficult job as it had been built in situ and the fixings could not be withdrawn without damaging the planking, so all screws and nails had to be cut through between the faces of adjacent timbers, a very slow and careful task. This was completed successfully so that the whole unit is now on the workshop floor. The drop keel housing and keel were also removed, hard and heavy work. 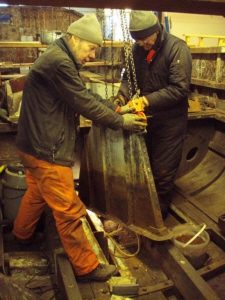 Brian Fenwick has continued with the work of stripping out and cleaning the inside of the hull, carefully removing defective components for manufacture of replacements. Work started under the forward deck and has continued back to the fuel tank area. This is no easy job, being very confined in places – far from comfortable – but necessary. 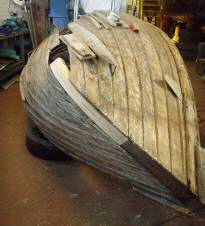 Charlie Lowdon and Peter Waugh have been concentrating their efforts on replacing defective timber on Spring Tide. The keel has been removed so that some bottom planks can be replaced and new timber has been inserted in the lower stem. This little salmon rowing boat from Whitburn is rapidly progressing towards a successful completion of the woodwork element. 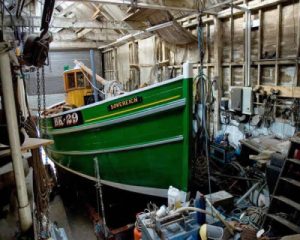 Sovereign entered Fred Crowell’s boat shed (next door to ours) in the summer and extensive restoration work has been undertaken in the last few months.

Work started with the hull which suffered from loosening of planks. The keel was found to be flexing at a scarf joint, causing a lot of movement over a large area. This has now been repaired and the whole keel fitted with steel bottom and side plates. The rotten rudder shaft has had to be replaced. The hull planking has been re-nailed with nearly 2000 new spikes, several planks replaced, joints caulked and filled. The tops of frames near the stem suffered from worm infestation and new ends have been scarfed on. Damaged areas of deck have been replaced. The old engine has been removed for replacement by a newly overhauled one of the same type (a Gardner 6LW). The gearbox off the old engine has been dismantled for reassembly onto the replacement; quite an extensive job and nothing like the simple arrangement on an automotive application. New fuel tanks have been manufactured to replace the old leaking ones.

The above is just a very brief description of the work that has been done to bring the vessel back to good order and more is to be done over the winter.

The project has been hampered by the failure to secure an expected grant from one of our national organisations. Fred has gone to great lengths to find ways of making the job achievable in spite of major funding problems. Materials and methods have been changed to make the works possible with the minimum impact on quality or appearance.

Fortunately the National Historic Ships Committee contributed an emergency sustainability grant for the hull work and the Port of Tyne Fund came to the rescue with sponsorship to make it possible for the boat to work again by supporting the engine replacement. Beyond these supporters, the vessel has relied on funding from the trustees of the Northumbrian Fishing Heritage Trust, who are all NEMT members. It is hoped that Sovereign will be ready to tour events before the summer of 2011.

Post Views: 2,029
This entry was posted in Early News Letters. Bookmark the permalink.

This site uses Akismet to reduce spam. Learn how your comment data is processed.